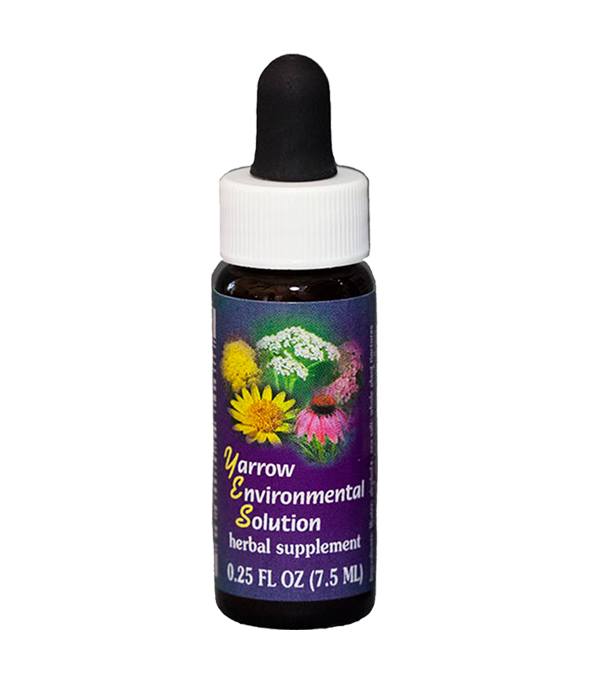 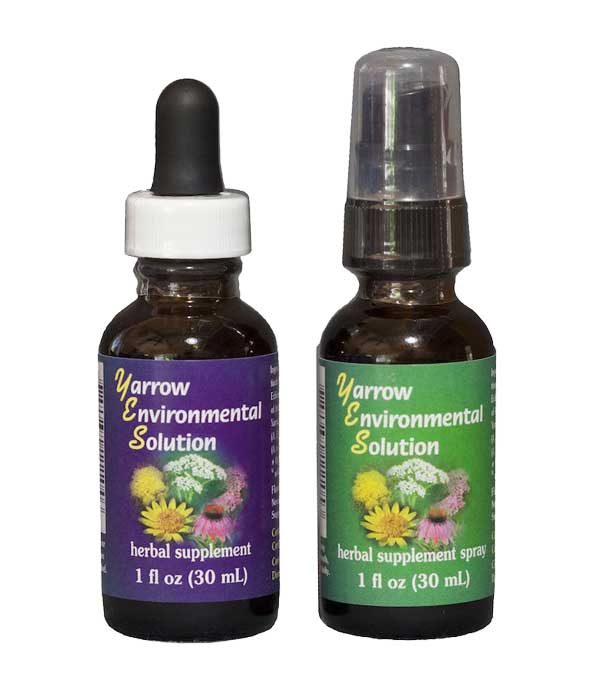 We offer this essence in  7.5 ml. You may buy 1 oz. dropper or spray, under FES, other sprays.

Strengthening and protecting against environmental challenges to our health and vitality—
Say YES to your health!

Yarrow Environmental Solution (YES) is a highly beneficial blend of flower essences and whole plant tinctures in a sea salt base. Its purpose is to strengthen and protect against toxic environmental influences, geopathic stress, and other hazards of technology-dominated modern life. This includes the disruptive effects of radiation on human energy fields from X-rays, televisions, computer monitors, electromagnetic fields, airplane flights or nuclear fall-out.

The idea for a “radiation remedy” came from the late Dr. Aubrey Westlake of England, who experimented with combinations of English flower remedies in salt water. In personal correspondence with us, he described such a remedy as “indicated when there is a reason to think that the patient may have had an overdose of radiation from nuclear fallout…[or other forms or radiation]. In these cases, the remedy appears to work therapeutically on the etheric body, and not directly on the physical.” During a visit to his home in Hampshire in 1984, we shared with Dr. Westlake the idea of using Yarrow essence as a further formulation of the radiation remedy, an idea which he enthusiastically supported.

In 1986, after the Chernobyl nuclear power plant disaster in Europe, we received numerous requests for a remedy that could help counteract the devitalizing effects of the radiation. We prepared Yarrow Special Formula for practitioners working near Chernobyl and other affected European countries, with many favourable results. Top

In 2003, we added the essences of Pink Yarrow and Golden Yarrow to further strengthen the formula, and it was renamed Yarrow Environmental Solution.

Note: The intended action of this formula is on the etheric level. Anyone suffering from physical illness as a result of radiation or other environmental afflictions should immediately consult an appropriate medical practitioner.

Dosage and Administration
Dosages should be taken directly from the stock bottle, four drops at a time, at least four times a day. Another dosage method is to add sixteen drops of the stock to a glass of water, stir and sip the mixture throughout the day. The frequency of these dosages should be increased during and immediately following radiation exposure. Yarrow Environmental Solution is also very effective in the general environment. It can be put into a misting bottle and sprayed around the entire person or in the surrounding atmosphere.

Yarrow Environmental Solution is equally beneficial when added to bath water. Put several dropperfuls in mildly warm bath water, and stir in a lemniscatory (figure eight) pattern for at least one minute. Soak for 20 minutes in this solution, and then lie quietly wrapped in towels for at least one-hour following, to completely absorb the beneficial qualities of the bath.